Fingerprinting for evidence in theft, fraud or wrongdoing. Telephone 020 7158 0332 or send email to info@ukfingerprint.co.uk

No matter how careful a wrongdoer may be, it is likely they will leave some evidence of tampering or misdoing. Unless someone is wearing gloves or full covering it is likely they will leave even a partial print behind. Forensic technique enables such evidence to be lifted. While comparison is an art in itself, fingerprints are unique and a positive match can be conclusive and irrefutable, providing sufficient points of comparison are found

Evidence in investigation is the key ingredient that turns a suspicion into a practical solution. Techniques such as surveillance and tracing will demonstrate an individual's actions, however often it is definitive disciplines such as fingerprinting and computer forensics that provide irrefutable evidence in a case

Fingerprint evidence is based upon two basic principles:


There are three types of fingerprints that can be analysed:
Plastic Prints and Visible Prints do not pose a problem to detection as they are visible to the eye and photography is usually sufficient in recording the image. Latent Prints far more difficult to detect and it is for this category that the majority of techniques have been developed

Obtaining evidence does much more than identifying the guilty party. Suspicion in a workplace environment can be damaging, and the presentation of assessing people's innocence rather than just the perpetrators guilt goes a long way to creating a positive work ethos. 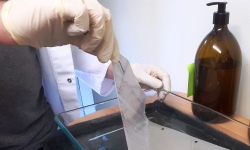 A signal of our credibility is our winning many Business Awards, a significant recognition